From left, V of BTS, Lisa of Blackpink and Park Bo-gum pose for photographers ahead of Celine’s Spring/Summer 2023 men’s collection presented in Paris on June 26. [AP/YONHAP]

According to industry insiders, V, Lisa and Park left for Paris together on a private jet departing from Gimpo Airport in western Seoul on Friday. 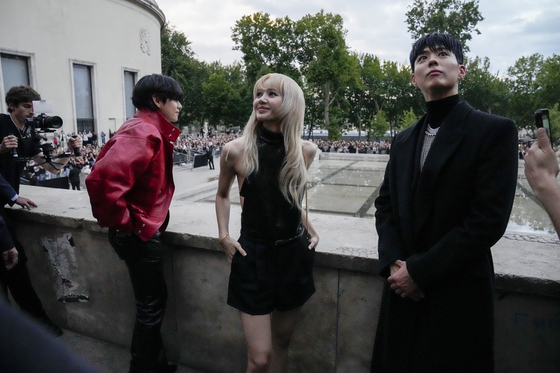 From left to right, V of BTS, Lisa of Blackpink and Park Bo-gum pose for photographers ahead of Celine’s Spring Summer 2023 men’s collection presented in Paris on June 26. [AP/YONHAP]

Park, who left with the two K-pop stars, is known to be one of V’s best friends. The two have been spotted hanging out in various places over the past few years since they reportedly developed a friendship in 2015 after meeting on a music show.

K-pop fans in Paris have warmly welcomed the singers and the K-drama actor, sharing video clips of star sightings on social media.

The three were also greeted with cheers when they arrived at the Palais de Tokyo, a modern art gallery in Paris, to watch Celine’s fashion show. Donning a striking red jacket, V waved to the crowd of people gathered at the scene to see him. The K-pop sensation is sharing her days in Paris with her fans via social media.