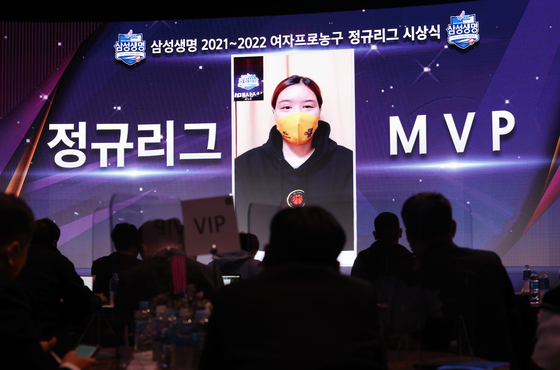 Monday’s award was not only Park’s second consecutive MVP title, but also the third of the 23-year-old’s career. Adding to that already impressive track record, this time around Park managed to win the MVP title with a perfect score of 110 out of 110 votes.

But Park was unable to attend the ceremony after testing positive for Covid-19.

“It’s a shame because I bought a pretty dress for the awards show,” Park said. “For me, the MVP award was something I could be proud of, but a burden at the same time. Now the award comes as a consolation to myself and the time I had to endure and will have to endure in the future.

Park leads the WKBL in points, rebounds and assists this season. Park is averaging 21.19 points, 14.38 rebounds and 4.81 assists per game, leading the KB Stars to the top of the league and the regular season trophy.

The KB Stars finished the season with 25 wins and five losses, but claimed the title in just 24 games, becoming the first team since 2008 to grab the top spot so quickly.

Asan Woori Bank holds the previous record of winning the title after just 25 games, winning 24 and losing just one in the 2016-17 season, when the teams each played 35 games in a season. The KB Stars have achieved this feat in a shorter season as this year the six clubs each play 30 games, playing each other six times in the regular season.

The KB Stars also set a new club record this season with a 14-game winning streak that lasted from November 28 last year to January 22. The club’s previous record was 13 consecutive wins in February 2019.

Even after winning their season title, the KB Stars continued the Incheon Shinhan Bank S-Birds’ 19-game winning streak in the 2008-09 season and the 2009-10 season, the most consecutive wins in the history of women’s basketball.

But that attempt was cut short on January 26, when Asan Woori Bank beat the Stars 79-74. The Stars lost two more games until they beat BNK 63-48 on March 19, then defeated Hana 1Q 74-68 on March 21. The KB Stars lost their final game of the regular season to Shinhan Bank on Saturday 82-77.

Now that all regular season games have been played, the top four clubs advance to the playoffs on Thursday.

The KB Stars will take on fourth-placed Busan BNK Sum as the regular season winners, while runner-up Woori Bank takes on Shinhan. The semi-finals will be played to the best of three.

The last two clubs in the running will play the final, which will be decided by the best of five.